I wrote “Conques la quête” in 2010, for the concert-reading that Polyfonías Poetry Project (Mark Solborg, Salvador Vidal and myself) gave in the shade of the huge linden-tree on Place Chirac in Conques as part of the annual music festival La Lumière du Roman. We have since featured it in most of our recitals, and it has become the central metaphor in the poetry, music and art book « Delta », which Ediciones de la Torre in Madrid published last year. Conques has, after all, become my hometown – mi pueblo – where I grow my polyfonías, the multilingual crop of a life steeped in four cultures, along with the Mediterranean and Nordic trees that I have planted in my « sacred grove » just inside the city walls.

My use of different linguistic registers is spontaneous, and often it is only when I finish the writing of a poem that I realise why the voice of this or another language from this or another period of my life has come to me at this particular moment. Translating my polyglot poetry into one single language would be like reproducing a Fauve painting in black and white. At best we could translate it into a combination of four other languages ; each tongue is like a color produced from a plant cultivated in a specific climate. Like the natural dyes we obtain from plants, each tongue has the tone of the soil from which it sprang. I shall, nevertheless, venture to make an abstraction from the colors of the poem in order to explain certain passages and the linguistic processes that produced them.

The second stanza in « Conques, la quête » is the one in which the linguistic palette is most colorful, and it is also the stanza that serves as an envoi at the Porte du Barry, the gate halfway down Rue Charlemagne through which pilgrims and walkers leave Conques. The envoi –  a brief stanza placed at the end of a poem as a dedication to an imagined or actual person – is a common feature in French medieval poetry, specially ballads. Imagining that the passage through Conques is a transformative experience, 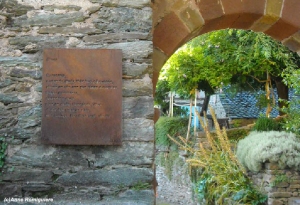 the second stanza in « Conques, la quête » is no longer the same when one leaves the medieval village as it was when one arrived there by the GR65. The letters have freed themselves of the weight of the steel and have risen like voices, like vowels, like luminous footprints across the night sky. The envoi has taken wing and has ceased to be mine. That is why I haven’t signed it. I want it to be a song of the road, a folk song, and therefore – from the farewell to Conques – an anonymous chant.

The strength of « Conques, la quête » lies in the contrast and complementarity of the Romanesque town, inviolate and eternal, and the ephemeral lives of the human voyagers with their desires and spiritual and existential quest. They are the voyagers that are described in the second stanza of the poem at the entrance to Conques above the town. They are the transformed voyagers with a deeper vision that the envoi salutes as they pass through the Porte du Barry :

Which could be translated thus into English :

But in the translation into a single language the mixture of tongues that have always lingered in the streets of Conques is lost. Besides, the ambiguity of the Spanish possessive pronouns and the minimalism of Danish grammar allow me to speak simultaneously about and to the voyagers.

To start with, I use snails (caracoles in Spanish) as a metaphor for the pilgrims and caminantes, due to both the slowness of their progress in view of the distance they have to cover, and their appearance, hunched under their backpacks. Søgende sjæle med hus på ryggen hints at two opposite traits in the Danish national character: on the one hand angst and doubt (restless souls) and on the other pragmatism and do-it-yourself spirit (abodes on your backs). In Danish this last phrase med hus på ryggen has become almost a synonym, or paraphrase, for snail: it is the surprising association of these familiar slugs with another commonplace – seeking souls – that produces the poetic spark.

The next stanza is a good example of my technique of «multilingual poetical cubism » or « meandering of meaning ». At first one would think that we’re dealing with an intertextual translation of the Danish phrase into Spanish. In fact, it is a translation and it isn’t a translation. The idea and the construction of the sentences are similar, but the different elements are composed of unexpexted pairs of clichés – that is, specific and sedimented derivatives from two different cultures :

As a consequence of this, their meanings are infused with different « colors », implying dissimilar and untranslatable emotional landscapes. To me the Danish metaphor is more metaphysical and the Spanish more visceral.

This is not the place for linguistic digressions or dissections so, for the sake of brevity, let me just say that I have coupled the word « commerce » with « eager » – a combination which conjures up poems and travel prose from bustling ports in English literature – because Conques as a main halt on the Camino to Santiago does bustle with both commercial and spiritual intercourse, and these two meanings are implied in both the English and French word « commerce » in spite of their different pronunciation.

Which makes me come back to the issue of the polychrome sense of the poem. Lyrical poetry is closely related to music. The sound is an essential element of its message. I call my poems polyfonías because they are tapestries of sound, woven from the voices of different languages, different cultures. The first and the third stanza of « Conques, la quête » are basically monolingual – in French – something which rhymes well with their « matter » : the village – austere and entirely built of chist, the local stone. The last stanza is also monolingual, but in this case Spanish, the tongue of the pilgrims’ Jacobean destination (mixed with the sounds of other tongues in the farewell chimes of the bells).

And in the middle of the mineral and inmutable silence of the stone you hear voices in the streets, squares and terraces of Conques ; the place of the human quest where all cultures blend and unite. 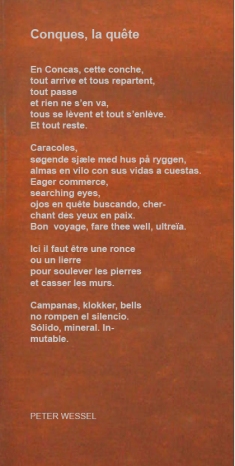