During the month of August, the original photocollages created by Spanish Artist Dinah Salama for Peter Wessel’s new translingual poetry-artbook+cd DELTA were exhibited at Librairie Chemins d’Encre in the Medieval French pilgrim’s village of Conques-en-Rouergue. It was in this setting that the poet on August 8th presented his book in a concert-reading accompanied by the French multi-instrumentalist Jean-Pierre Rasle.

Because he considers Conques to be his second birthplace, it was a deeply moving experience for the Danish poet, who settled there 37 years ago after recognizing the village from an adolescent dream. With time, this thousand year old confluence of European cultures has become a metaphor for Peter’s life and poetry, and – in 2014 – the Town Council decided to have the poem “Conques, la quête”, which he had written and dedicated to the village, carved in two Corten steel plates and place them where the Way of Saint James enters and leaves Conques. 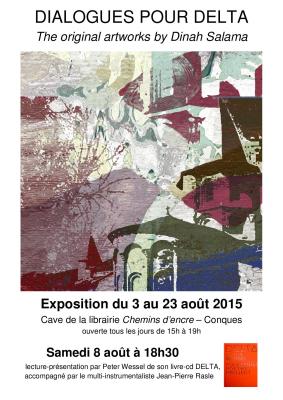 Furthermore, on a different note, the international journal of literary translation Asymptote has recently published three poems from Delta on their blog, both in their original polyphonic language and in Elena Feehan’s perceptive and ressourceful translations into English. Asymptote defines itself as “an exciting new international journal dedicated to literary translation […] bringing together in one place hitherto unpublished work by writers and translators such as J. M. Coetzee, Patrick Modiano, Can Xue, Ismail Kadare, David Mitchell, Anne Carson, Haruki Murakami, Lydia Davis, and Herta Müller”.